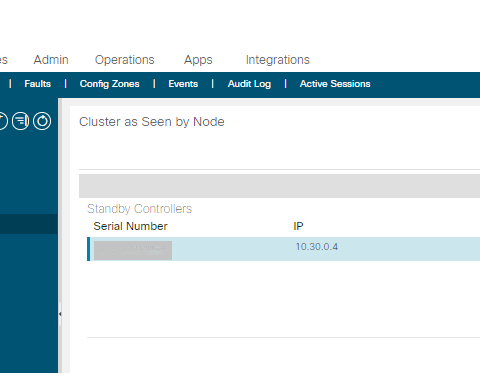 Following a hardware issue on a Cisco APIC, we had to replace the PCIe NIC card of the server (based on Cisco UCS). And as you may also encounter if you are reading this, it wasn’t straight forward :)

The initial problem was that the Eth2-1 and Eth2-2 ports went down after a few hours after each reboot, and that’s a problem in an active APIC cluster… we decided to replace this APIC by the standby one in order to maintain a stable cluster of 3x APICs, before replacing the card.

How to replace an active APIC with a standby one is an article to be created soon :)

We replaced the card ~20 minutes operation (shutdown the server, open the top panel, extract the PCIe card, replace with the new one, close the top panel, rack back the server, power it on, cable it back). The details can be found here, and for any other component replacement, it’s here.

After replacement, the symptoms are the following:

The problem was the following: after the replacement of the card, the LLDP configuration was enabled on the UCS side, and it was overwriting the LLDP packets in direction to the Leaf switch.

The leaf switches based on received LLDP packets were not able to determine that those ports were connected to the APIC and put interfaces in Out of Service state.

We had to disable LLDP from the CIMC interface of the APIC (Networking > Adapter Card 1 > General > Uncheck “Enable LLDP”).

Click Save, and then a reboot of the APIC is mandatory for it to be applied. (from the CIMC > Host Power > Power Cycle).

After that, LLDP was functioning properly on the APIC, connectivity with the cluster was re-established :

The standby APIC was able to reach all the active APICs (it wasn’t before):

(to get the cluster info seen from current APIC, the standby one)

(to get the cluster info seen from APIC1, one of the actives one, to compare with the vision of the any APIC, and see if they can exchange informations)

The standby APIC was now visible from the GUI (it wasn’t before).

RTFM they said… It is stated here at P.19 of the Cisco APIC M3/L3 Server Installation and Service Guide, LLDP should be disabled:  https://www.cisco.com/c/en/us/td/docs/switches/datacenter/aci/apic/server/M3-L3-server/APIC-M3-L3-Server.pdf